Sadiq Khan should be shamed on this and other failings with public transport in London. I think the press are the ones to complain to. I would say email our London Assembly members, but they never reply to anything. You’re lucky to get a read receipt.

Contact the BBC and the press. There isn’t time to do anything else but kick off.

He’s elected to represent us Londoners.

The Mayor has a duty to set out plans and policies for London covering transport, planning and development, housing, economic development and regeneration, culture health inequalities and a range of environmental issues including climate change and air quality.

That duty should include a duty of care for our safety. Whether or not that transport comes under TFL ownership or whoever owns it.

It doesn’t actually- it’s operating capital comes 2/3 from fares and borrowing. The grants it receives are ring fenced for projects such as crossrail and the northern line extension.

Southern is a private company- the Mayor cannot force it to anything it doesn’t want to. TFL tendered to operate all the trains on our route and were blocked from doing so.

Put blame were it’s due- in this case on Southern.

So TfL is not using public money … by virtue of it borrowing money?

Who do you think is going to have to repay that money?

It’s not a zero-sum game. Infrastructure investment allows more people to move more easily and facilitates more economic activity overall. How is this different from investment in road maintenance and building? That’s paid for by public money too…

Let’s not go off topic by debating the value/ethics of borrowing money for infra projects.

This is veering off topic you are right.

My key point was mainly that TFL/the mayor can’t force Southern to run more services, much as I wish they could.

TfL can do nothing about Southern and the way they run their services. As people have said Govia are a private company whose franchise is awarded and overseen by the DfT.

Maybe we need a split thread as Sadiq Khan has no influence and nothing to do with the safe transit of Londoners, whoever supplies the means of transport. At least he’s stopped saying “my Dad was a bus driver”. I’ve always thought the GLA a waste of money anyway.

This chart illustrates the huge amount of public money going into transport in London, compared with other parts of the country. 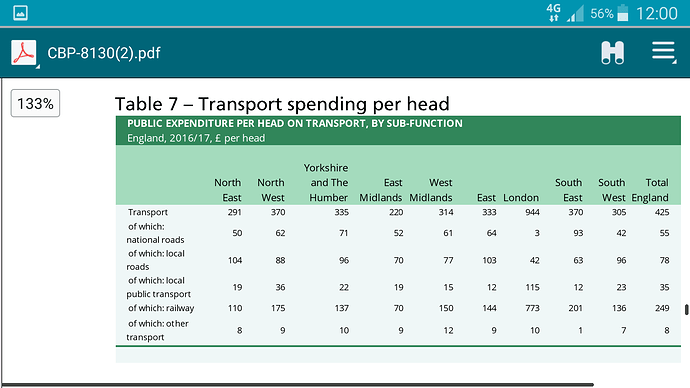 Source of that chart and further info downloadable here:

Maybe we need a split thread

Is any of that going to Southern Rail?

I think yesterday’s bailout was just to TFL. But I’m not sure.

Two different points. Every other transport company has already been bailed out unconditionally. TFL finally has but 500m is a loan. Despite tfl carrying more passengers than every other company combined

So Southern Rail has been bailed out by tax payers’ money then? In addition to TFL being similarly bailed out?

As ever things are quite complicated.

TfL are a local government body responsible for Transport in London - buses, some roads (red routes), DLR, Underground, trams and a limited number of overground services (eg Overground, TfL Rail). The Mayor and GLA have control over those.

However a lot of mainline stations and overland track is owned by another public body - Network Rail which the Mayor and GLA have no control over - which for example is why the Overground 24 service does not come further than New Cross as it runs on London Underground lines until then and Network Rail lines after that.

Finally a lot of London, especially SE London, is serviced by overground trains running in to mainline stations. These are run by private train operating companies (TOCs) whose franchises are awarded and monitored by the Department of Transport. Again the Mayor and GLA have no control over those.

In terms of “bailouts” I understand that yesterdays £1.6 bn was just for TfL.

In terms of the TOCs franchises have already been suspended which essentially means government is covering their operating costs now.

I’ve emailed Sadiq Khan London metro southern rail and Grant Shapps
I think we all have to kick up a stink about this.
Now more than ever we need efficient transport to prevent overcrowding and potential spread of Covid.

Might be worth adding Ellie Reeves to the list. Of all the London and other local politicians I wrote to about another issue, she was the only one who did anything. She didn’t get anywhere, but at least she tried.

i’ll do that Monday.
I’m so depressed by this I can’t even think about it any more especially as its looking like in a few weeks we’ll be back to pre-pandemic traveller levels.

I doubt that. It’s 9% at the moment. I, in common with a lot of office workers have been told our offices are not reopening any time soon. I continue to work from home full time.