The A205 Pedestrian Crossing Problem at Forest Hill Station

This is the response Ellie Reeves MP received from TFL last month regarding our request for this crossing to be improved.

Thank you for your email regarding the crossing on London Road, near Forest Hill station.

This crossing was due to be improved during our 2015/2016 Crossing Works Programme. However, due to the 2015 Comprehensive Spending Review, this did not go ahead and it was put on hold. The scheme was being considered as part of our Healthy Streets Local Schemes (HSLS) and the team had started to carry out pedestrian surveys.

Unfortunately, the Healthy Streets Programme, which this scheme is a part of, has been significantly impacted due to the coronavirus pandemic. In March 2020, in line with Government guidance, we brought all project sites to a temporary safe stop unless they needed to continue for operational safety reasons. As such, the team were unable to continue with pedestrian surveys and this scheme has been paused as we continue to deal with the coronavirus pandemic.

Our income has significantly reduced and we are currently operating on an emergency budget from the Government. The emergency budget will last until October and will enable us to keep running our services during this time. We have recently published a revised budget which will form the basis for our next round of negotiations with Government, for funding from October onwards. The outcome of these negotiations will determine what programmes we will be able to fund for the subsequent months.

I can confirm that this scheme is being considered to restart, should we receive sufficient funding from the Government in the next funding agreement. I know this will not be the response that you were hoping for, but I hope it provides some explanation for why this scheme cannot proceed any further at this stage.

I’m going to have a chat with Ellie’s team about a few things this week (including issues with Thames Water/Leaks/London Road) and I’ll suggest that we write back to TFL to ensure we get a response following the signing off of their revised budget from October. Fingers crossed there’ll be enough money in the coffers to finally carry out this Crossing Works programme.

P.S. London has been the only major city in western Europe that hasn’t received direct Government funding to run day to day transport services since it was cut by the last Government.. This is thanks to a 2015 agreement between then-chancellor George Osborne and then-mayor Boris Johnson that London’s transport network should be self-funding…

That’s useful, thank you for the update.

Interestingly they mention they don’t have the budget for this much needed work but they had the budget to re-pave the whole of Devonshire Road that none of us residents asked for (or particularly required - making good to the damaged paving was all that was needed).

And also they found more than a million pounds to spend on the blanket #20mph project, which had barely any measurable effect on speed or safety.

I’m cynical when I hear central govt being blamed for the council’s lack of budget for transport improvements.

I think it’s right to be cautious about such claims. There is probably some substance in it but it may not be the whole story.

Clare, it should be noted that the right turn into London Road on the westbound South Circular can be made from either lane. The lane markings indicating this are near invisible as it happens which doesn’t help.

it should be noted that the right turn into London Road on the westbound South Circular can be made from either lane.

Correct, but I have seen cars make the turn on the wrong side of the pedestrian island! I thought maybe Claire was referring to that very dangerous but thankfully infrequent manoeuvre.

I was going to say the same thing, though to be honest ‘going around the outside’ as a car is also a little perilous - on entry to London Road you are immediately greeted with a lane merge at a pedestrian crossing, potentially with a bus pulling out or pulling in, or both!

As a focal point to Forest Hill, so much of that junction needs re-thinking. And I don’t particularly care if it’s owned by TfL, who the Mayor is or was, and where funding is or isn’t provided. It would just be nice if those that have been elected could work together to improve things without laying blame or trying to score political points.

I meant they were using totally the wrong side of the road. Driving into on coming traffic.
I think in just the last 6 weeks I have seen 4/5 drivers doing the same mistake on that part of the road. Fortunately no one was injured with any of them, but it was extremely close with the cyclist the other day.
I have no idea why they should think a busy two way road would suddenly disappear at traffic lights.

I’m very interested in this seemingly insane manoeuvre, but also very confused as to what is happening. Can you please explain the details?

Car approaches the junction FH station on its left, pedder estate agent on right.
Car then drives on the wrong side of the road to turn right to go up London Rd. (Would be in the grey car’s lane) head on,
& wrong side of pedestrian crossing. 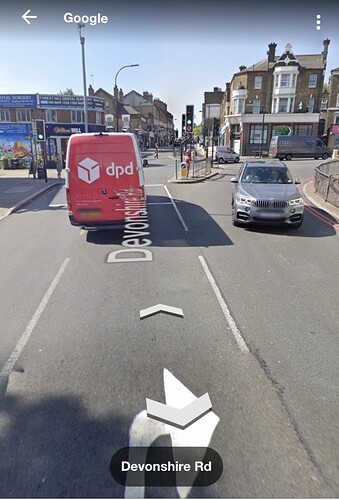 When I used to sit in From The Forest, Hassan and I used to see it regularly. A good few close calls there. Also suicidal pedestrians who had only getting their train in mind and would bolt across the road. It’s not a great junction.

getting their train in mind

If you miss the pedestrian light by Pedder and wait for a green, then you get to the middle and it’s red to cross part 2 to Smiths. It takes a full 3 minutes to get from one side to the other if you just follow the lights and often I’ve been ‘on time’ for a train and still missed it. Nothing more frustrating than watching your train pull away while you can’t get across. So yes sometimes that’s why people go ‘suicidal’. Or you build in a 3 minute contingency into your station route plan.

You mean they actually do that ? That is breathtaking. I suppose i am surprised yet not surprised. For me that is just another example of what happens when you have virtually zero visible law enforcement on the streets and a growing culture of transgression where an increasing amount of people just get used to the idea that they can do what they want when they want, with minimal chances of being challenged and a still less chance of actually being caught.

. So yes sometimes that’s why people go ‘suicidal’. Or you build in a 3 minute contingency into your station route plan.

I know it could be marked better and it is an awful junction. BUT If you’re approaching up that hill it’s kinda obvious isn’t it that traffic is approaching from the right and it’s not three lanes… unless they are just reckless and trying to beat the traffic?

It’s so crazy, I wonder if there’s some kind of GPS mapping glitch where someone has databased 3 lanes in that spot and it says ‘get in the third lane to turn right’ and people stare at screens rather than the road. I have no idea how you could make that mistake in real life.

Agreed. I have seen a few do it on purpose when their lane is booked but the majority have the kind of look on their face that I do when I realised I just turned down a one way street, the wrong way.