I’ve noticed in a few other threads that there are a couple of people out there who, like me, like the odd craft beer. There are a good number of local breweries so I thought in the interests of finding out where you can get good beer and where it is brewed I thought I’d start off by listing a couple of my favourites (note that I lean heavily in favour of the citrussy flavours of an IPA) in the hope of getting some recommendations for other local (or even further afield) beers.

Good idea for a thread. I haven’t sampled enough beers to give a well-informed opinion, but my favourite two so far:

A great local meetup group for enthusiasts is: 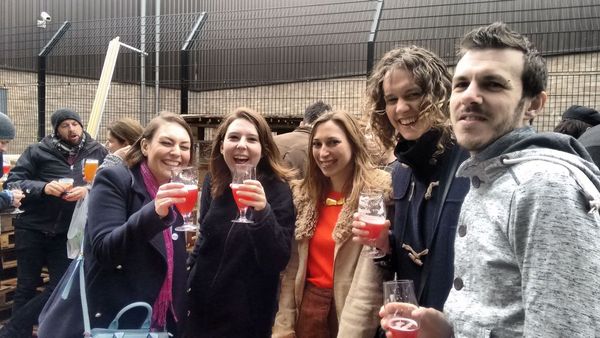 Agreed re the Shoreditch Blonde, which incidentally they used to serve in Mamma (née So) Dough. When I asked why it was off the menu was told it was more than 15 miles away, hence out of their supplier radius. I did challenge this (I reckon it is more like 7) but got nowhere.

Kernel Table Beer though is in a class of its own IMHO.

ETA: Five Points Railway Porter is rather good too.

Comoed, is the Brockley Brewery worth of your local list?

The Kernel Brewery is a great visit on a nice day. They have long benches to drink and neighbouring delicatessens to purchase other essentials like cheeses and hams.

@Andy It certainly is, its just their (very local and no doubt quite tasty to some) beers just don’t quite do it for me. I need lots of hops!

+1 for the Kernel Brewery too. Yes, good shout - I had a number of their Saison Ale, Armadillo, the other night if I recall correctly…

Was at Lewisham Tesco the other day and grabbed a 12oz can of Pistonhead Amber (hadn’t seen it before) and was really pleased. Almost sweet with orangeyness.

@joerobot Spendrups brewery (Sweden) who do the Pistonhead produce some pretty nice beer. There is one IPA they brew called ‘A Ship Full of IPA’ which I particularly like, but I’ve never seen it in the UK

Zerodegrees in Blackheath is great. Stumbled across it one evening and fell out of it a good while later

Late Knights Brewery is excellent. Brews in Penge and is sold at London Beer Dispensary (Crofton Park) and Beer Rebellion (Sydenham) and (I think) the off licence on the Perry Vale side of FH station.

+1 for the little off licence on Perry Vale. I’m glad the owners finally found a niche for that property after the two former failed attempts. I’ll have to check out Late Knights wares in there. Also in case you’re buying more than a couple, they give you a free bottle for every 6 you buy.

We were at the Herne Hill Velodrome on Sunday and Canopy Beer Co were there, I’d highly recommend their Tall Trees Session IPA. Tasty without being overpowering and at 4.2% highly quaffable. Aside from that new discovery, Brixton’s Effra Ale and Brockley’s Golden Ale are my go to local beers.

Me too, although I stuck with Honest Brew as I quite like their model (regular craft beers in the post, customisable taste preferences).

The referral link below gets you 50% off your first order and gets me 4 free beers:

I just noticed a new shop in East Dulwich which will fills flagons.

I heard on the grapevine that the Perry Vale beer shop is looking to get a tap in for filling flagons/growlers, which would be awesome. Also further afield a new place is opening up in Brockley that will be selling homebrew equipment alongside beers and the owner’s a fan of ace northern melodic punk rockers Bear Trade so it’s bound to be great. This is such great news! I am very happy.

Just by way of gloating a little, I managed to procure some Heady Topper last weekend and have very much enjoyed consuming it

Hop and burns told me their flagons work out at about £7-8 a litre. I was hoping for a bit better value but I’m sure I’ll give it a try.

Whilst taking advantage of the buy six get a 7th free offer on Saturday, Neck Oil, Quelle Farmhouse Pale and Flat Iron American Red if you’re interested, I asked about the tap rumors and apparently he’s put his order in and paid a deposit for it’s install but it’s been delayed a bit. Hope it comes quickly as it’s definitely the closest potential growler stop on my cycle home.