Hi Kevin. If your vehicle meets the ULEZ requirements then the new boundary makes no difference at all.
The boundary goes as far as the north and south circular roads but doesn’t include them, so non compliant vehicles on the south circular won’t have to pay as long as they don’t go inside the zone.

From 25 October 2021, the existing central London Ultra Low Emission Zone (ULEZ) will expand to create a single larger zone up to, but not including, the North Circular Road (A406) and South Circular Road (A205).

@ThorNogson link gives all the details so you can check your vehicle compliance.

Here’s a link to a high level map of Lambeth, Southwark, Lewisham and Greenwich that should help you figure out if your route needs to change

Thanks for the link @ThorNogson
I used it to check my car and I have to pay £15 to £17.50 per day
My car has never failed an emissions test - always comes out with a really good score. It has a good quality, newish catalytic convertor. It’s a small lightweight car, so emits much fewer particulates from tyres than heavier electric vehicles.
I have to make regular trips, by car, to King’s.
I’m really quite cross about this.

That’s rough, if you look up in general what vehicles comply, you quickly find this.

So is it elibigle for the charge simply by virtue of being a diesel?

It’s not a diesel. It uses that unleaded new fuel (E10? the cheaper one anyway).
Shame too that I can’t go to Shannon’s any more.

2006 Honda Jazz. Yes I was quite surprised I would have to pay. Honda cats are really efficient.

You should only need to pay the central London congestion charge with a 2006 Jazz. My slightly older Jazz isn’t caught by the ULEZ charge.

I used the link that @ThorNogson provided to check my reg number and that said I had to pay. I think a lot of people will get caught out thinking, like I did, that their car is young enough not to have to pay.

I think the link is not clear. I am sure I have read that if it says the £15 a day that is the congestion charge, not the Ulez which is £12.50 a day I think.

Also keep in mind you only get charged for either when you drive the car, so if you are parked 6 days out of 7 you only pay for one day.

If however the car is not Ulez compliant AND you need to travel into the congestion zone, then I think that is £27.50 per day you do it.

Edit I just checked our vehicle which I know is compliant and got the, if you got the same message you are liable for the congestion charge but not the Ulez (not at the top it says liable for one charge):

Yes I did the same and had a brief panic that our car wasn’t ULEZ compliant. It is and the only charge we need to pay is the central London congestion charge. Worth double checking as your car is newer than ours.

Phew yes that’s the page I get. That is a relief. Thanks so much all who helped me navigate this.

I wonder is the vehicle checker just advising that vehicles are only liable for the congestion charge (ie £15-17.50) because the Ulez expansion charges are not currently in place?

I was sure I understood what I would have to pay/or where I couldn’t drive anymore & now I’m just confused.

I wonder is the vehicle checker just advising that vehicles are only liable for the congestion charge (ie £15-17.50) because the Ulez expansion charges are not currently in place?

No, I am sure it tells you if you also have to pay for Ulez. If you only see congestoin charge, you are Ulez complaint.

Have done a search for a non-Ulez compliant car and this is what you should see (note 2 charges and the Ulez bit listed), as opposed to the 1 charge and only congestion charge listed for a compliant car image above: 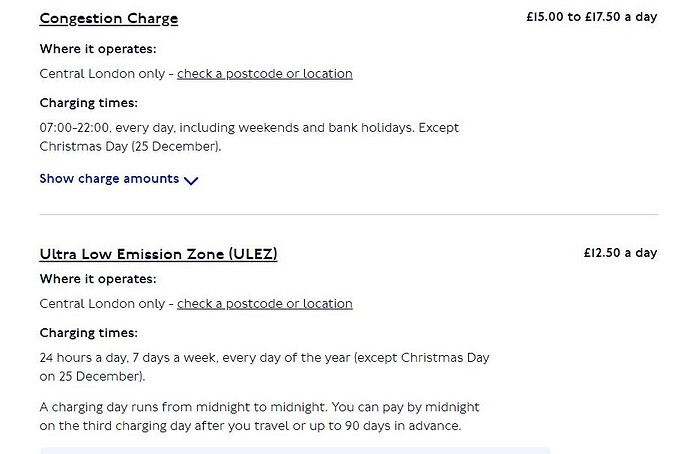 @oakr you have made my day. Thank you.

I think it’s done on the age of the vehicle - as that presumably indicates which euro standard it meets. I think it needs to meet euro6 to be exempt. My old 1.4L engine Clio was from 2000 and also always passed the relevant emissions tests as part of MOT, but didn’t meet the euro6 requirements. It was 18 years old so I was changing it anyway. Bizarrely my 2L engine Mazda does meet the standard!

it’s v annoying for you though

it’s v annoying for you though

Check out the update:

That is a relief. Thanks so much all who helped me navigate this.

I’ve just put the registration of my last car - 2003 Honda Civic scrapped in April - and it clearly states that it’s liable for the congestion charge but NOT for ULEZ. You’re good to go. 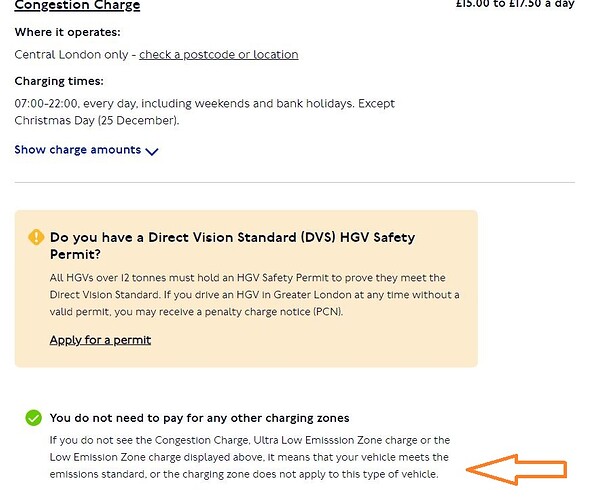 Sadly my current hybrid car isn’t congestion charge exempt like it would have been a few years ago. Ho hum, I’d not consider driving into central London anyway.