Came home to this after work. Don’t know what to think anymore, could be just a stupid joke could be burglars markings, God forbid anything worse. Have reported online to police 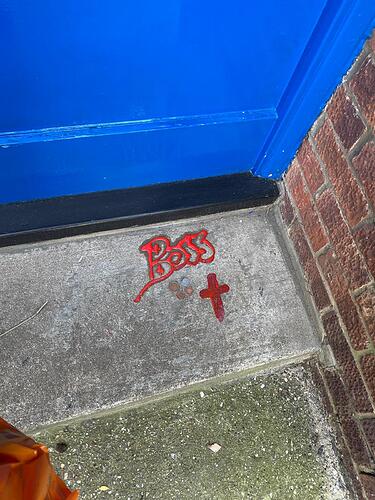 Very creepy. Lost for words with that one. You did the right thing by reporting it !

With the coins too? Very odd… but looks quite elaborate for a prank or ‘mark’ although can’t think of a good reason for it.

Hi Chris. That must be unsettling. I’ve heard the theory of the burglars code before but it doesn’t make sense. Why mark a house and alert someone? I’ve also heard that it’s a burglars code to other burglars but I doubt there is a burglars community helping each other out. Not the most community minded people out there to put it kindly. I think it’s probably kids pretending to be in a gang and trying to intimidate people. Like when they used to ride bikes on the pavement or walk through train carriages. Now it’s doing wheelies in the middle of the road to annoy drivers. All very childish but what can you do? I digress and this is starting to sound like a comment you’d read in the daily mail.
Anyhow I understand your concern and you are right to tell the police but please try not to worry. I would bet it was childish kids pretending they live on the mean streets of Rio.

A long shot - but I wonder if police could get a bit of a thumbprint off the head of the 2p coin?

I think it is too visible a mark to be a sign amongst burglars. Have you had any door to door callers recently? Selling dishcloths or other small items?

Crosses on doorstep is reminiscent of the Plague, where people marked houses of those inflicted/ dead with the mark of a cross. It’s quite a cheerful marking though that you have. Try not to worry about it. Any luck - fast broadband is due to come to your house very soon.

Let’s see what the police come back with. I wonder if it’s just he wrong address - which would be my suspicion, and some sort of mark of respect for someone, who perhaps has passed away - sign of the cross and luck coins maybe?

Try https://www.reddit.com/r/whatisthisthing/ - they’re pretty good at all sorts of random things like this.

The markings maybe due to Dog Thieves, although they look elaborate. If you have a dog be careful as thieves are known to stake out residential areas and leave marks outside houses who are targeted.

It doesn’t seem particularly threatening. It could just be a tribute to a deceased former occupant.

It does look very creepy, especially with the cross, & the colour…