What's changed in SE23 since you moved here?

So what’s changed in the area since you moved here, or were born here in fact? Doesn’t matter how long you have been here, a few months or all your life.

We came here in 2005, to Honor Oak. Plenty of things are now around that did not exist then (including this forum!).

I particularly remember the very elongated process of getting litfs installed at HOP station, delayed and delayed, and always hoping as we were still using the Pram then which was always fun up and down the steps. You forget how you’d help and be helped up the stairs - I almost miss it!

This was of course after the Overground arrived which probably led to a significant change / influx of people to the area, and steep property price rises. The overground did make a big change to how easy it was to get to work for many, no doubt the biggest infrastructure change since I have been here.

HOP High street has also changed beyond recognition. From my flagging memory the Pizza place on the corner was ‘The Old Bank’ an Italian restuarant with great food but incredibly and painfully slow service. There was then a small Deli place next to it, and further down I think was a Tequilla Bar, that became Bar Equal, then the Stone Bar and is now the Turkish Restaurant. Sebatian Roche was opposite the Old Bank, however on the corner where they now are was an amazing shop with lots of carves wood sculptures, I used to love walking past it. Back o nthe other side was a small pet shop - no Dominos, Siansburys or any of those yet.

Chandos had quite a change, with it’s remodel and decision to sell pizza which was likely a great decision for them. Talking of pizza, I’m not sure when it happened, but SE23 went pizza mad and we all of a sudden ended up with lots and lots of pizza places to eat. The same could be said for coffee houses!

Forest Hill pools closed shortly after we moved here I think, and there was debate about how and when they would reopen, which thankfully they did after a significant refurb - I never got to swim in the old pools.

The Blythe Hill festival started after we arrived (I think) which remains one of my favourite things about the area now.

Oh and I think the Peregrines may have moved to Forest Hill as wlel during this time!

No filofax, no yuppie

We are finding on our road that as people are either moving or going into residential care, that there are a lot more professional couples, or couples with young families (who must be able to afford the prices) moving in. Got to say though they are all really nice, & we have a WhatsApp Road group set up as well.
It’s also nice to have new life moving in & see the children growing up.

Mac Donald’s used to be where energie gym is, and it had a ball pit/soft play area.
There was a bakers where the nail salon is on corner of havelock walk.
David Mach Studio Havelock used to be Hallmark catering company that moved to willow way.
Chocolate box although many many years ago used to be next to The Dartmouth Arms, coming down towards station.

But still there for DVD’s.

Mac Donald’s used to be where energie gym is

And it was Woolworths (left of photo) before McDonald’s. 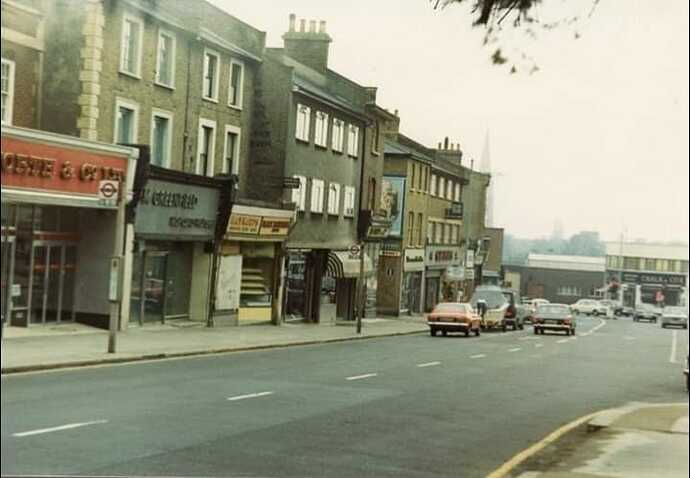 Not many cars and no bus lanes either.

A speedboat though. Maybe been on Bullseye

And it was Woolworths (left of photo) before McDonald’s.

What’s in the phot bottom right?

But still there for DVD’s.

Now that is a shop that is part of the furniture!

It’s amazing what you find on the internet. Wimpy next to a wine bar!

Wimpeys and a wine bar? So you could have a bottle of Liebfraumilch or Bulls Blood with the Wimpey platter (I guess Wimpey charged corkage).

In the 70s photo beige or “brahn” predominates. We just need the Sweeney to pop round the south circular.

Excellent pics by the way - thank you for sharing

What’s in the phot bottom right?

I seem to remember it being a butchers.

I moved to my flat in Forest Hill in December 1988 and I’m still there!

There was a butchers (I think it was Dewhurst which were a national chain of butchers) where the betting shop by the railway underpass is now. . And a few doors along Dartmouth Road in one of the units that the estate agent now has was a greengrocers. Right opposite the station there was a lovely little bistro where I often used to go with friends as the food was ok and it was reasonably priced, but can’t remember the name of it!

I saw a photo recently of this being a butchers, and I believe before this it was called Chalk & Cox. 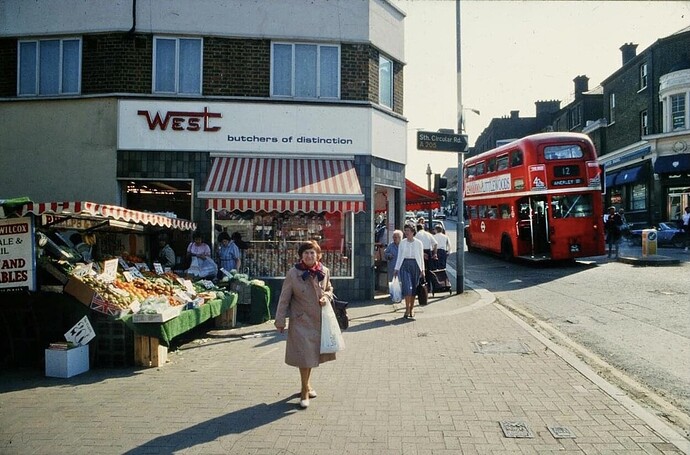 Thanks Robert I certainly don’t recall the name Chalk and Cox but West’s does ring a bell - I think they were a chain too although I can’t find anything about them online.

And the number 12 bus on Dartmouth Road!

Ah, and a photo from the days of the No. 12’s huge route… It says Anerley, so probably when it ran from East Acton to Penge / Norwood Jn. The 12 originally ran from South Croydon to Brent Cross, which must have taken hours.

And the number 12 bus on Dartmouth Road!

Yes it used to be one of the longest bus routes in London.

Before I moved to Forest Hill I lived in North Kensington (right by Grenfell Tower!

) and used to walk down to Holland Park Road and get a 12 from opposite the Kensington Hilton Hotel all the way to Forest Hill. I think it terminated at Penge.

I used to get it from Shephers Bush into town when growing up, though I never realised it came all the way here!