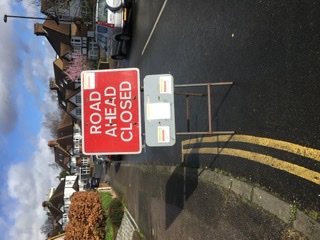 I was about to turn in and had to reverse when I saw the sign.

Any councillors know why?

The residents of Derby Hill Crescent from Derby Hill to Thorpewood Avenue have permission from the council to close the street on the first Sunday of the month for “Playing Out” allowing the children to play on the street. The sign would have had details of this attached. I believe the sign was out on Saturday, but not blocking the road, just to give everyone advance notice of the closure on Sunday.

That’s an interesting idea - I’ve heard of streets closing for one-offs but not on a regular basis. I wonder if it will become more prevalent in the future elsewhere. I quite like the idea.

I don’t mean to be rude - just curious - but I know I’ll probably be shot-down.
Anyway, why would children need to play in streets when the nice green park (Baxters Field) is on their doorstep? 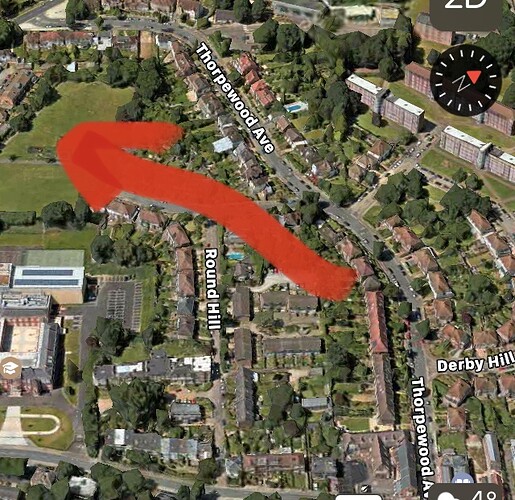 I’ll join you in the target line up: I don’t think this is the way to educate children on road safety.

Also, Lewisham has just given £30,000 of our money to Baxter’s Fields so it’s a shame if these local children don’t use it.

@Anotherjohn and @marymck I don’t think this stops anyone using Baxter Fields - it’s one day a month and people can still go there on that day if they wish.

Whilst it will never happen on my road (a busy road) I expect it is nice to have kids in the same street be able to play together, look out of the window, see kids other kids playing and go join them, for me these things are nice for getting to know your neighbours more on your street etc (I assume anyway).

I’ve seen on other dead end streets kids will be with parents practicing roller skates \ blades cycling and with children having the convenience of a toilet and some food very close by is always appealing, and means you don’t have to go out prepped with all sorts of things.

Of course I’m just assuming above, but I back onto a communal garden area and that is nice in that you can see other kids out playing and mine can go and join them.

What happens to all the parked cars? Assumedly they have to all go and park elsewhere? Otherwise there’s hardly any room on these streets. And if people have converted their gardens to driveways, then that’s even less legitimate space for children to play.

I guess just because it’s a nice thing to do and it only being one day a month doesn’t put anyone to too much trouble?

I expect it is nice to have kids in the same street be able to play together, look out of the window, see kids other kids playing and go join them, for me these things are nice for getting to know your neighbours more on your street etc (I assume anyway).

I’ve seen on other dead end streets kids will be with parents practicing roller skates \ blades cycling and with children having the convenience of a toilet and some food very close by is always appealing, and means you don’t have to go out prepped with all sorts of things

Such insightful assumptions. You explained it better than I could.

I’m sure the kids use Baxter’s field a lot of the time. The play street is complementary, not a general alternative.

What happens to all the parked cars?

On the street I live on (not DHC) many of them are just left where they are. Not ideal, but there are too many cars around to expect neighbours to move them.

I interviewed a resident of Derby Hill Crescent, and yes, great for the kids to play out in a car-free environment, and also a brilliant way to get to know your neighbours.

Information on how to set up your own Play Streets on Lewisham’s website:

Closing a road for a play street event

Apply for a temporary road closure for children’s events.

I’m obviously clearly out of touch with what does it for people now - which doesn’t bode well for my month old granddaughter! (I’m already getting told off for being too rough with her)

a brilliant way to get to know your neighbours

Surely it doesn’t need the road to be shut off for neighbours in a fairly close-knit enclave like this to start talking to each other?
I’ve tried, but I still can’t get my [thick, old] head around that concept - not here, in Forest Hill.

I don’t think the road closed sign should have been put out until the road was actually closed for the event, which I understand is for a maximum of three hours. The original poster naturally assumed that “road closed” meant the road was closed, forcing her to reverse. I can’t see any notice attached that indicated that this was just an advance notice of the fact that the road would only be closed for certain hours the next day (certainly nothing visible from a motorist’s pov).

Having now read the Council’s requirements I understand that when a road does get closed for a play street event then there have to be marshalls at the barrier and cones or hazard tape and that it’s also reassuring that the Council recommends that the organizers have public liability insurance, which seems sensible as this is a big responsibility for the organizers if something goes wrong.

What was it like when you were a kid? Did children play in the street?

This is the romantic vision people have but, sorry to burst that bubble, no, at least not when I was an 11yr old kid growing up in Agnew Road (almost bang opposite where @oakr lives).

We used to knock for each other and go walk to Honor Oak rec or to Blythe Hill Fields.

Obviously, the perception (probably the reality also) is that it’s less safe for children to go off to the park in pairs or small groups but surely that would encourage neighbouring parents to take turns in taking each other’s children to the park, which is what I did with mine and their friends - even though it meant embarrassing myself rollerblading along holding their hands (to hold me up!).

I’ve got no problem with shutting roads off but the reasoning makes me feel a bit sad if I’m honest.

If you want friendly neighbourhoods go knocking on doors with your children and say “Hello - we live just along the road so it would be great to catch up or to give you a hand with anything if you need it”. It doesn’t need a closed road to create a community - just communication!

my month old granddaughter! (I’m already getting told off for being too rough with her)

That happened to my granddad too. It’s an occupational hazard. He used to lift me up high so as I could reach up to touch the ceiling. One of my earliest memories is my aunties (and there were five of them) fussing around what seemed like miles below and fussing at him that he’d frighten me, till the aunties frightened me and he had to give in. So don’t give in.

I played on the street once. Till my Dad put a stop to it. Cowboys and Indians and I was tied to a lamppost, on the roadway side, while the Indians whooped around in a circle. My Dad was furious probably because he was scared. I can remember the telling off and the lecture about roads being for cars and how all the others scattered. That was when we lived in Homeshaw Road. Our usual play spaces were Home Park and our gardens. That must have been more than 60 years ago, because we moved to Letchworth when I was 5 or 6. And we weren’t allowed to play in the street there either. (Mind you, if my Dad had known we’d been playing in the Arlesey Pits I’d have got more than a telling off).

I am totally in favour of you closing your road on Sunday and I hope you had a good day.

I don’t think the council has given you permission to block the road as shown in the photo on Saturday. The sign didn’t serve to give advance notice, it blocked the road and said clearly Road Ahead Closed and caused people including myself to turn around. Any details attached were not visible.

I agree with Mary, put your sign up only when the road is closed.

I have a lot of sympathy for the residents of Derby Hill Crescent and can understand why they would put up a large Road Ahead Closed sign blocking their road a day in advance of their Play Out Sunday. Thorpewood Avenue and Derby Hill are pretty solidly parked most of the time so they get the overflow parking and many people prefer that street for parking especially those with kids as having a driveway behind rather than a car gives you more space to take out your buggy or anything else.

I have a lot of sympathy as well for those who want to park on a public road and feel that a Play Out Sunday should only affect them on that day and during the hours that it takes place.

Perhaps a solution is a Play Out weekend and not just for kids but adults as well, some kind of festival involving those roads in between Dartmouth Road and Kirkdale centred round Baxters Field to celebrate it getting £30,000 from Lewisham. I am sure it could replicate the success of the Dartmouth Road opening party.