It is time to vote for Lewisham in the toughest stage of this competition. If we can beat our friends in Southwark we can win this for the third year in a row.

Croydon really pulled out the stops last night and defeated one of last year's finalists!! But that's not important today, because today is what has become our annual grudge match... LEWISHAM vs SOUTHWARK
Anotherjohn March 24, 2020, 2:23pm #2

our friends in Southwark

Grrrrr - those posh people in East Dulwich and the hippest-of-hip hipsters in Peckham ain’t no friends o’ mine in this bitter fight! (Shame I’m not on Twitter though

Which is why Southwark has surged ahead to 52%. Oh. The horror! 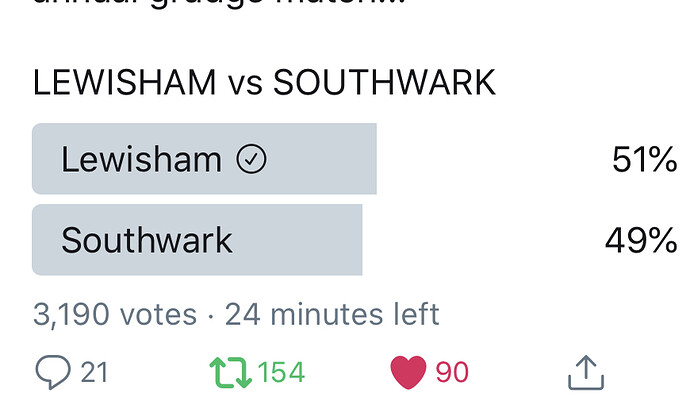 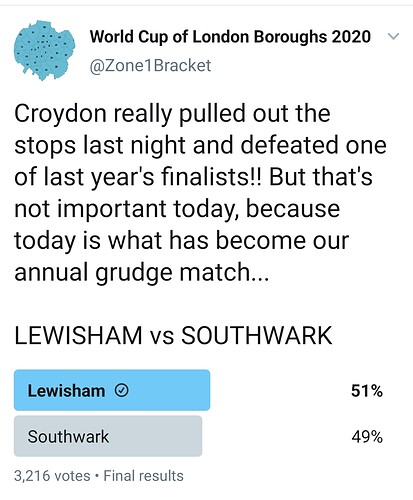 Wow the Greenwich lot get up early. Lewisham falling behind early doors.

Lewisham has overcome Greenwich’s commanding lead and it’s a dead heat. Come on… get voting.

After a first half in which an entertaining and freeflowing Greenwich were first out of the blocks and took a commanding lead, the defending champions were staring semi final defeat in the face. Desperately rallying support from online sickbeds and bored home workers across the borough, they slowly ground their way back. It wasn’t pretty; as the Royal Borough complained to the referee, comparisons with the brutal Leeds United side in the 70s were made, but the SE Londoners did what was needed to edge their way to the final, 51 to 49.

I don’t really get this thing, but now we could win I’m right behind it! Looks like a strong start for Lewisham