The scaffolding has finally come down at the plot of land adjacent to the Perry Vale roundabout with Mayow Road, and we can see a glimpse of what’s being constructed: 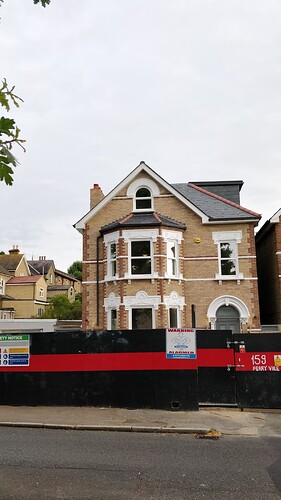 It looks just like the neighbouring houses and fits really well! A nice addition to the street, I think.

That looks fantastic. As good in real life as in the photo?

Looks to have a high quality of build and detail on the brickwork and alcoves. The neighbours must be pleased not have a another block of flats crammed in

I saw it today; it fits so well with the other houses on the street. Clearly some great builders.

Brand new from the foundations up… it was overgrown scrub before.

Yes, it had planning permission, it’s on Lewisham’s planning site as ‘land adjacent to 161 Perry Vale’:

There were some earlier applications for flats, which were refused - fortunately, as they wouldn’t have look as nice as this building does.

I have to say that I’m disappointed with this conformist build on such a prominently viewed position, where there appears to be a clear architectural dividing line between traditional, and well built, Victorian houses on one side of the road and a real 1970’s contrast leading up Mayow Road with high rise flats beyond.
I have no objection to development, where appropriate [not on publicly accessible land, as Duncombe Hill ‘Green’ may show - if it isn’t shown to be publicly accessible, then my opinion remains open].
In my view, ‘corner sites/highly visible sites’ deserve better than conformist architecture, which does nothing other than to reinforce the architectural/social separation of private housing and social registered/local authority housing stock.
This was an opportunity to ‘link’ the current architectural difference on either side of Perry Vale/Mayow Park and failed to deliver, in my view.

There were some earlier applications for flats, which were refused - fortunately, as they wouldn’t have look as nice as this building does.

Great decision by the planning department, and a nice outcome.

Hang on - I didn’t say anything about supporting development of the site for flats. I simply stated that the prominently viewed site merited better than a conformist build. I haven’t viewed the application - maybe you can fill us in on whether this development is a single dwelling, or divided for separate occupation.
I would be all for a similar height development [single dwelling or divided for separate occupation as an H.M.O./Flats] of diverging architectural merit to its immediate neighbour at 161.

Sorry, I didn’t reply to you.

Ah. Well, perhaps you could outline why this conformist architectural format for a single dwelling, 5 bed house [now that I’ve checked the planning permission] is good for this site, where it sits in direct architectural ‘conflict’ with the social housing stock located opposite.

The space it occupies is between two large period houses, so to my mind the ‘conformist architecture’ is entirely sympathetic to what is currently on that side of the road. Surely anything other than this would look somewhat incongruous?

The social housing opposite is an absolute blight (and I’m sure the residents there agree) - it looks horrendous. The new house that’s been built on Perry Vale is beautifully made and entirely in keeping with those around it. If only the architects responsible for the monstrosities opposite had shown a little more sympathy to the surrounding area, we’d have been spared that eyesore. As it is, that development conflicts with just about everything else around it. Quite why you’d want to construct anything that in any way links to that development architecturally is beyond me.

Well, to be fair, the new house occupies a corner plot and matches its immediate property in architectural style, but not the other house leading off down Sunderland Road.
That’s why I put forward the opinion that corner plots/stand alone sites can ‘break the mould’ of simple, architectural conformity and allow architects of today to bring something fresh. Especially when there is a mix of architectural styles already present and within plain view of this site.
I believe that Lewisham Council’s planning decision to support a conformist development was a poor one and safe option [even though the house looks well built].
The roundabout next to the new build means that this site should have attracted the eye to an architecturally inspired home - just as the old Fire Station building by the next roundabout by Woolstone Road attracts positive, visual attention.
Instead, it’s bland, it’s just going to blend and I’m really annoyed about it.

It’s not Lewisham’s place to put forward their preference of architectural style, merely to make an objective decision based on their own planning policies as to whether or not the application in front of them is compliant, which, presumably, it was - as could have been a modern house.
Your comments regarding the style are a matter of taste, which the local planners don’t normally get too involved with on small scale developments like this (except in Conservation Areas) so your beef should be aimed at the owner or the architect, who, I agree, had a great opportunity to put something well designed and more contemporary there (that would look nothing like Shifford Path opposite - YUCK!)

The Shifford Path development was approved by the same London Borough Of Lewisham’s Planning Department. In my view, Lewisham’s planning department got it wrong with approving Lewisham Council’s own addition to its social housing on Shiffold Path [the blandest box type architecture] and has got wrong now with approving a conformist, private housing stock addition on Perry Vale, which simply reinforces the ongoing perception of ‘them and us’ on either side of Perry Vale.
I don’t believe that Lewisham Council’s jarring architectural social housing stock on Shifford Path is best matched with a conformist new build. This new build simply reinforces negative, social/economic divides in our community.

Interestingly, further North up Perry Vale there is an “architecturally interesting” house on a corner plot. It has remained uninhabited since it was built. So personally, I think building a “conformist” 5 bedroom house that will actually be used is preferable to that. As for reinforcing social / economic divides, whoever owns that land has the right to build whatever they like on it, if they can obtain planning permission for it. Are you seriously arguing that they should have designed something that would make people in social housing opposite feel less envious?!

I’m suggesting that any private landowner has every right to apply to build anything they want. But, it is for Lewisham’s Planning Department to assess the merits. On this highly visible, corner plot site located directly opposite social housing stock of poor architectural quality, which continues to provoke negative emotions, then approving an ‘in your face’, privately owned 5 bed ‘conformist’ house on the other side of the road will not assist in bridging the social/economic divide on either side of Perry Vale.
In fact, I believe that it will act negatively on the locality for many years to come.
Basically, if you live on this side of Perry Vale - you are better off than those who don’t due to architectural separation.