Wow either cars or motorcycles speeding around the area like it’s a race. The noise just now what is wrong with people lately. Anyone hear or notice anything frightening.

With the speed many drivers are now going I find its s race to cross the road.

It’s making things unpleasant and more dangerous, especially when there are so many small children on bikes on even quite major roads at the moment. Stepping out off pavements into the road to maintain social distance is going to be needed for months. Let’s hope we get some more space for pedestrians and cyclists soon. 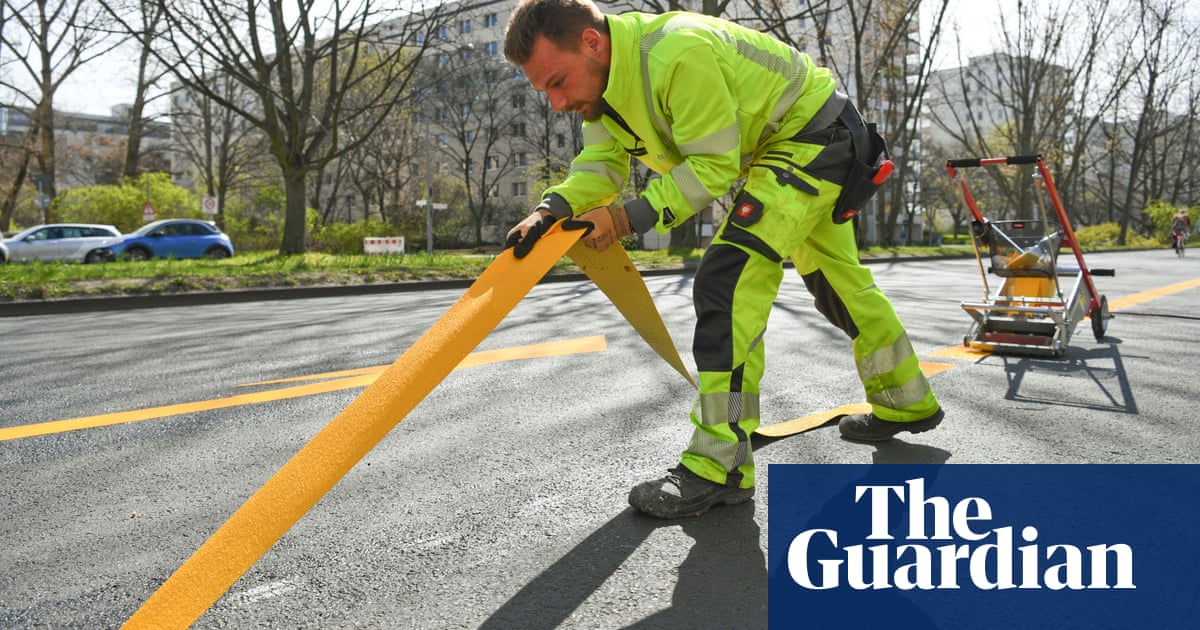 World cities turn their streets over to walkers and cyclists

I think I heard that last night at about 10pm or something like that. It sounded like very fast and loud cars. I live in Crofton Park and they seemed to be heading north having come from the Forest Hill direction. Scary noise. More scary still when you realise that very little is likely to change. There is far too much of this sort of thing about. It seems to happen day in day out. It’s like living in a suburban version of Mad Max Thunderdome sometimes.

I don’t thing they realise that if they have an accident they may well be attended to by a gynecologist. Which would seem apt!

It’s getting beyond a joke. Cars bomb up and down HOP, many doing over 30mph let alone the limit of 20.

On my journey home on Thursday night, I saw two cars smashed together at the top of Sydenham Rise. Likely caused by speeding.

What can we do ? It seems as if the cards are stacked against the law abiding taxpayer.

It seems like some drivers have lost whatever braincells they had in the first place. Last night a mini was at the top of Honor Oak Park in the middle of the road just before the junction of Honor Oak Road/Forest Hill Road. They’d had an accident, the front bumper and the grill was hanging off. One of the occupants was sitting on the bonnet smoking a cigarette.

Tonight I drove up Honor Oak Park and aimed towards the middle of the three traffic calming tables at the requisite 20mph. The car behind me overtook me on the right doing at least 30, possibly more. That is a blind hill and they could have come a cropper.

Just picking up on this topic I decided to do some spot checks… I went out and drew a couple of lines on the road 10 metres apart. At 20mph (speed limit on my road) you’re doing 8.94 metres a second so you should be covering the gap in just over a second.

I downloaded a timer video app, went up, video’d the first car driving down the road and took a couple of screen caps.

Yes that’s 1.96-1.46 which is 0.5 seconds to cover 10 metres. Thats 44 mph. More than double the speed limit. That’s why we can’t have nice things, that’s one of the reasons for road closure of notorious rat runs.

Is this scientific? No, but it’s a ball park calculation that gives you near enough double the speed limit. I’m here all day, I can do this all day long.

Well done. You should offer services to the police

The problem you have there is that if modal filters were installed, due to the one-way system on Manor Mount and David’s Road, there would be no vehicle access to those roads, Pearcefield Road or the Sainsbury’s car park! Road narrowing schemes could probably prevent access for Sainsbury’s lorries too.

I guess right now you get lots of cheeky cars ‘nipping’ in right from London Road to get onto Honor Oak Road without waiting at the lights.

Given Fairlawn Primary School nursery is there, it’s a shame something can’t be done easily (like a school street).

Assuming drivers could be made to obey the “no turn” signs, what do you think to that idea?

A good few years ago the council put in speed measuring equipment on Waldenshaw Road and Manor Mount. Waldenshaw had an average speed IRO 38mph. Manor Mount was IRO 46mph, down the wrong way!!!

There’s no simple solution here because people need access to Sainsbury’s. I’m a bit confused by your Manor Mount suggestion as it’s one way UP the hill - no one should be turning in here from Honor Oak Rd (but they still do).

The only idea I’ve come up with is to have an average speed check system and make it 5mph from the to of Waldenshaw to the end of St David’s. That doesn’t affect residents or people going to Sainbury’s but prevents people from taking shortcuts. They’d literally have to count to 60 before exiting the system. It’s daft I know. Also won’t fix the speeding issue as people race to buy groceries.

The other crazy idea is to close Waldenshaw at the Manor Mount end, reverse St David’s so it’s the ‘way-in’ and let the Sainsbury’s lorries exit at the top of Manor Mount with some redesign of the turn… not ideal for people trying to get to Sainsbury’s as you’d struggle to turn across the circular from the east.

The least crazy idea is to have Sainsbury’s stock out of hours and load from the London Road front door. Then they don’t even need to run the lorries down Waldenshaw which would make my house happy as I can feel the foundations shake from my bed on the 1st floor as they go past.

Sadly I don’t think it would hold up in court. I might leave a video running for an hour one day and then edit it, could the traffic volume and speeds and send it to the council though.

I’m a bit confused by your Manor Mount suggestion as it’s one way UP the hill - no one should be turning in here from Honor Oak Rd (but they still do).

As they say, a picture is worth a thousand words, road signs placed at the approaches as drivers would see them: 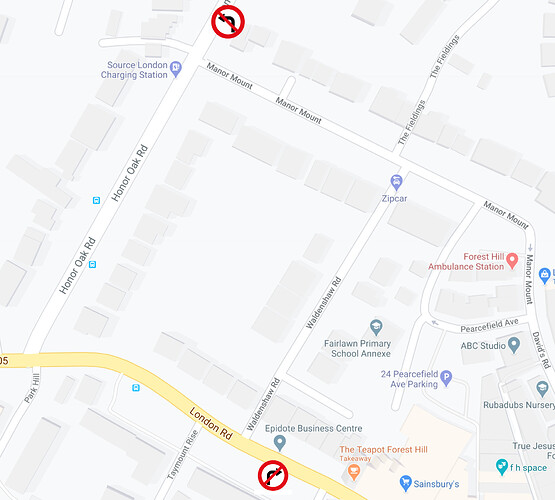 I think you could try to achieve similar goals by forbidding right turns into Honor Oak at the top of Manor Mount, but drivers would be likely to just ignore the restriction having already mentally committed to taking a short cut when turning off London Road into Waldenshaw. It’s better to try and dissuade cutting through at the point of entry, I think studies would show.

The only idea I’ve come up with is to have an average speed check system and make it 5mph from the to of Waldenshaw to the end of St David’s.

I think the point of modal filters is to add passive systems (i.e. near zero cost after installation) to encourage desired behaviour and actions. I’m not sure an average speed check system achieves this, or would be near cost effective to operate on a small road like this.

Waldenshaw at the Manor Mount end, reverse St David’s so it’s the ‘way-in’ and let the Sainsbury’s lorries exit at the top of Manor Mount

I don’t think the Sainsbury’s lorries would do well going up St David’s.

Speaking of speeding: I know I’ve said/written it before but Perry Hill desperately needs a speed camera put in place to combat all the idiotic boy racers that treat it like a race track in the evenings.

In the past I thought about filing an FOI request for the data from the traffic flow sensors to attempt a similar speed calculations for Woolstone Road. I’m talking about the ones where they run two ‘cables’ across the road at something like a 10m interval. I heard that they don’t use them for speed calculations, only flow, but if they have 2 measurements then it must be possible to estimate speed (given some simpleish assumptions).

Do you both mean Davids Road ?

Yes indeed, sorry, not sure where I got the St part from in my head. Probably confusing Dunstans with David - sigh.