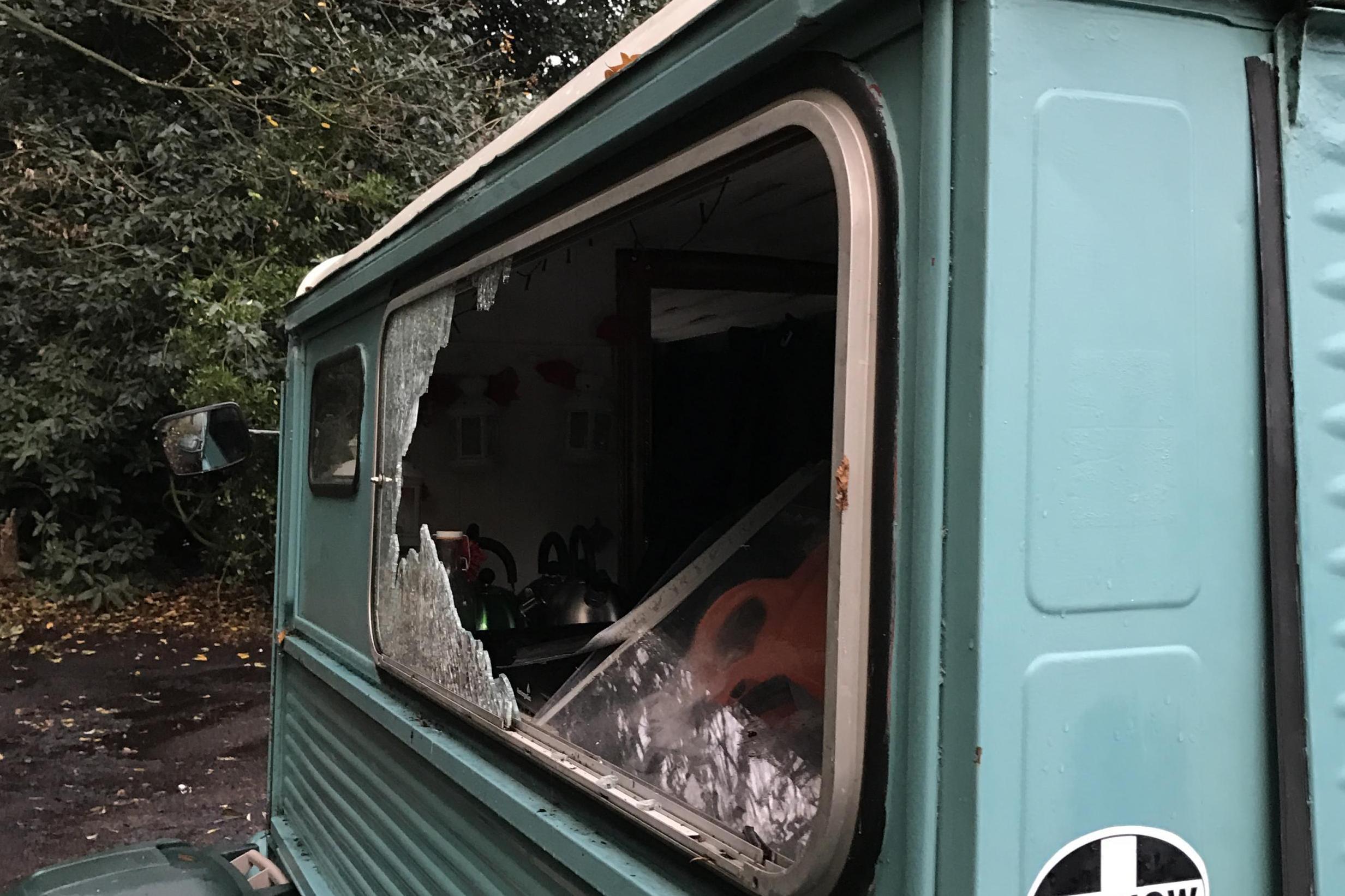 A camper van converted into a fine French bistro has been attacked by "jealous" thugs just days after being named the best restaurant in Sydenham. La Petite Bouchée owners Caroline and Anita-Clare Field woke up on Thursday morning to a Facebook...

My other half knows the ladies and they have have had a hard time. This is just dreadful. What selfish Cambridge University Netball Team players!

Just phoned my other half, Caroline in floods of tears and Anita devastated.

@Cazimo Thanks Caz, it gets it across but is not understood by younger viewers

See you next Tuesday is another way to put it. As in C U Next Tuesday. @Londondrz @Cazimo although I do like John’s version.

Anything we can do to support them?

Anything we can do to support them?

I believe someone has offered to repair the windows which is fantastic. It has also been removed. Some people are just sick b’stards.

it gets it across but is not understood by younger viewers

Unless they’ve been to the City University of Newcastle-upon-Tyne.

Once in a dispute at the school I work in, I formed the Council for Unified Non Teaching Staff - didn’t go down well.

Maybe we could help by finding someone to move the van, possibly storing it for them if needed for free. 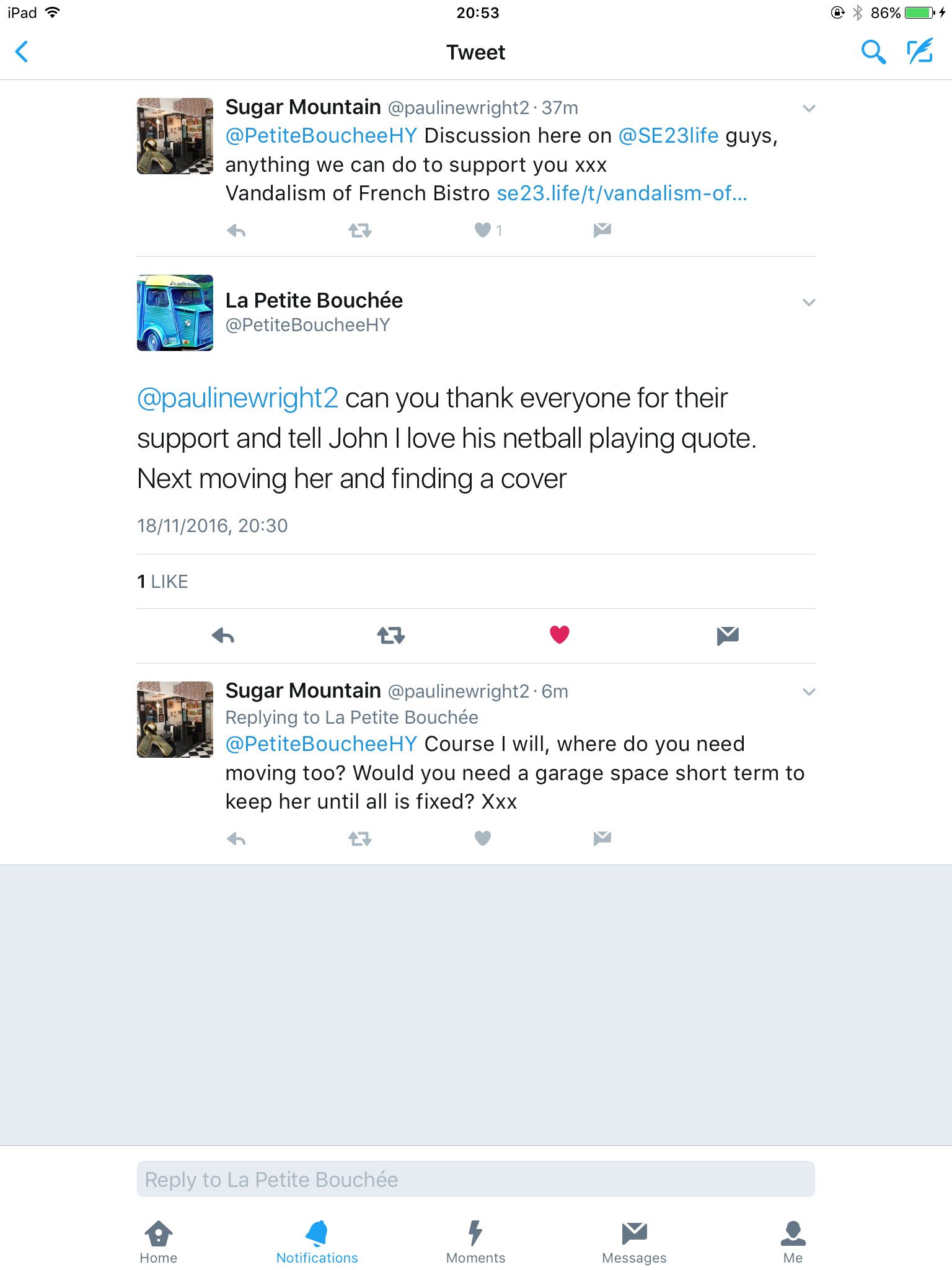 @Pauline I understand the van has been moved already.

Possibly, that discussion was about 2 hours ago.

It really makes me angry & hope the “Competent Under Nineties Trust” gets found & put away!

The aftermath of these attacks is heartbreaking to read.

Running a small business means putting yourself out there and being vulnerable to the whims of the government, the public, press, and spiteful competitors. The latter is the worst. It’s a horrible feeling, to put huge energy and time into a fledgling business and to know someone else is actively trying to destroy it.

If there’s any silver lining, it may be that the press coverage of these incidents will cement La Petite Bouchee into peoples’ minds, and their next ventures will be well supported as a result.

I hope the police catch these sick bastards. Lynching anyone?

Obviously not a real lynching, the snowflake generation would have a moment.

Caroline & Anita need to borrow a large tarpaulin for a few days, has anyone got one they could lend?

Wish we could help - just walked past to see it boarded up. Terrible, really hope they are caught.

Caroline & Anita need to borrow a large tarpaulin for a few days, has anyone got one they could lend?

Will have a dig in the shed tomorrow morning. I think I have one.

They’ve got some now!

She couldn’t be moved in the end today as the pick up truck broke down, but will go ta a safe place tomorrow.

Fingers crossed all is well tonight

@AllInnOne lent a tarpaulin & @FHGinClub offered to lend some too, they popped in this morning to thank us for the FH support,

The van was due to be moved to a safe place at 11.30, so hopefully she’s on her way now, and they hope to be back up and running again in January. But this won’t be in Wells Park. So any suggestions & I’ll pass them on…