The noise from London City Airport may be less noticeable while we spend more time indoors, but their low altitude concentrated flight path remains in place, with flights over Forest Hill already set to double the numbers of 2017, and it looks as though they want more.

_London City Airport _
'In the autumn of last year the CAA backed the concentrated flight paths London City Airport introduced in 2016. This was a big blow to communities living under them. Now there are renewed fears that in its Master Plan, due out in March, London City will outline proposals to seek planning permission to lift the annual cap of 111,000 flights permitted to use the airport. At present there are around 83,000 flights each year but the airport is trying to attract more leisure flights in order to bring in more planes during the quieter times of the day (mid-morning to mid-afternoon). The better news is that London City, under a lot of pressure from our sister organisation HACAN East, has recognized that its planes impact areas many miles from the airport. It has installed mobile noise monitors in the Forest Hill/Dulwich area after good work by people from the Forest Hill Society. ’

Meanwhile the GLA Environment Committee is due to publish a report this Thursday which will include comment on the concentration of flightpaths over London.
Now published:
Excellent report by the London Assembly, in which many of the arguments put by SE23 residents appear. 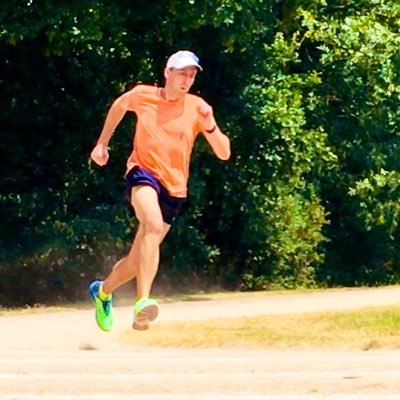 Forest Hill & Honour (sic) Oak #SE23 makes the @thetimes with its “daily nightmare of noise”. I miss Concorde and the Phantoms tearing across the treetops as a kid. And I’ll fetch my coat. https://t.co/ikKgEC6Eaa 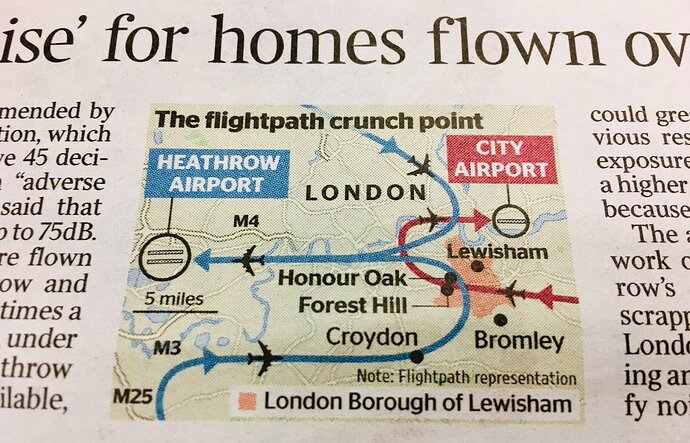 SE London’s campaign group Plane Hell Action had a meeting with London City Airport’s CEO last week. They clearly do not want to listen or acknowledge that low altitude concentration of planes over London is not ok. Sobering reading. The only thing they understand is complaint letters. anyone else inclined to fire one off about their dismissive attitude to residents and our environment?
use the London City Airport Website: www.londoncityairport.com . Click on ‘corporate’ and then under Environment, click on ‘Complaints and Enquiries’.

Thanks for sharing. What was Kate Hoey’s reaction to this?

don’t know yet but I know Mo and will ask her when we next meet - I think she has probably been discreet in not saying anything on that issue. Kate Hoey described it on Twitter in neutral terms.
'Useful meeting
@LondonCityAir
to discuss aircraft noise over Kennington
@MoKorda
,Liam McKay and CEO Robert Sinclair
@planehell

One other thing about complaints on this issue is that it’s not really enough to just complain once, you need to keep sending them complaints each time the LCY concentrated flightpath bothers you. This is because the basis of their justification for this is that fewer people are affected by the noise of the concentrated flightpath (but those same fewer people are affected repeatedly and without respite). Therefore they are relying on those affected people only complaining once in order to keep complaint numbers low - in fact those affected should keep complaining over and over again in order to ensure LCY can’t massage the data to their advantage.

The only thing they understand is complaint letters. anyone else inclined to fire one off about their dismissive attitude to residents and our environment?
use the London City Airport Website: www.londoncityairport.com . Click on ‘corporate’ and then under Environment, click on ‘Complaints and Enquiries’.

I just filled out their web form and pressed ‘send’ - was then presented with a blank white screen, should I assume it failed and try again? Is there normally an automated email acknowledgement sent out?

That could be a more or less daily task then in some weeks! However, as it did wake me up this morning, I’ll send in another.

If you scroll back up after submitting, you should have a grey box with a ‘Thank you’ directly under the opening sentence.

just a reminder that in the present fine weather all London City Airport arrivals are overflying us once again, perhaps there is a correlation between fine weather and easterly winds (anyone know?). Planes at 2000ft every 4 minutes at some times of day. Research shows that different people are disturbed by different noise levels. If you are at all concerned, read on.

London City are on record as saying their key reported measure on the issue is numbers of complaints so it is up to us to fill their inbox. You do this by filling in their form at https://www.londoncityairport.com/corporate/Environment/Environmental-Complaints-Enquiries
or by emailing environment@londoncityairport.com

Meanwhile Forest Hill Society with Dulwich Society will be meeting London City executives in early March to raise once again what we want to change - a redesign of flightpaths over us with proper consultation, an end to the concentrated flight path, flying higher for longer, periods of relief from aircraft noise and proper joint planning with Heathrow to minimise or end double overflight.

just a reminder that in the present fine weather all London City Airport arrivals are overflying us once again, perhaps there is a correlation between fine weather and easterly winds (anyone know?)

Yes, there is. Fine settled weather is usually accompanied by a high pressure system. Winds go clockwise around high pressure which means the winds here are more likely to be easterly on those occasions.

Completely agree on the double hIt aspect, my last complaint turned out to be Heathrow but definitely back to City lately.

London City are on record as saying their key reported measure on the issue is numbers of complaints so it is up to us to fill their inbox.

and its nice to see we managed to keep the numbers up last year, and were mentioned in the CEO’s report to their consultative committee. (minuted at http://lcacc.org/meeting-papers-key-documents/recent-minutes-of-meetings/ )

“During Q3 LCY received a total of 163 complaints relating to the operation, 29% of which were from three individuals. In the same period last year, 105 complaints were received. Contributing factors to this increase are likely to be warmer temperatures, and increased awareness of airport operations due to the Noise Action Plan consultation and a paper published regarding noise in SE London.”

Last chance for anyone to fill the consolation out; it closes at 11.55pm tonight.

The links that @ThorNogson posted do make it much easier to understand the consolation from our SE London viewpoint. And as I listen to a plane through a closed window echoing as it passes overhead, and realise that it could get even noisier, I’d ask you to consider making that last push if the planes remotely bother you now.

A massive result for campaigners and the overflown is emerging - London City Airport have been told to review their arrival and departure routes in line with today’s legislation with a proper consultation, as opposed to the shambles they did in 2014 resulting in a low altitude concentrated flight path over SE London. They have defended the indefensible against MPs, the GLA , residents and campaign groups for three years - but now they will have to go thru a process like the one Heathrow are doing.

This from the CEO’s quarterly report published by their Consultative Committee, LCACC at http://lcacc.org/meeting-papers-key-documents/

2.10 AIRSPACE CHANGE UPDATE
• The Government’s airspace modernisation programme: ‘Our Future skies’ is in the early stages, with the objective to deliver quicker, quieter and cleaner journeys with more capacity for the benefit of both passengers and communities. LAMP phase 1A was an early stage to this, in which London City Airport upgraded the navigation technology along all departure and arrival routes. In October 2018 the CAA published the post implementation review of this change, confirming 1.2 million people are no longer being regularly overflown below 7,000 ft, arrivals stay over the sea for longer and in a narrower area over land, and departures climb high quicker.
• As part of the next steps in this modernisation programme, NATS are currently developing an airspace change proposal to modernise the airspace structure and route network above 7,000 ft. All airports in the South East are key consultees in this process and are planning to review their arrival and departure routes to determine how best to connect with these high-altitude network changes.
• The airport will therefore be launching an airspace change proposal this year in line with the CAA’s guidance (CAP1616). Engagement and consultation with local stakeholders and communities will be integral through every step of this process, starting with engagement on design principles. The modernisation programme is due to be completed in 2025.

This is a good result, but is really the beginning not the end of the battle.

People need to:
(i) keep complaining to LCY about the low-altitude concentrated flight path over Forest Hill and don’t stop complaining, don’t just complain once, complain every time they overfly Forest Hill (about 150 days per year, on which there are approx. 150 flights at less than 2000ft above ground level along the exact same route); and
(ii) keep your eyes on this forum and local news for details of the future consultation and then engage with it to give respite to Forest Hill from constant aircraft noise.

For those who haven’t fully understood what LCY did in 2016 it’s this simple: they took the roughly 20,000 arrival flights that previously approached LCY over an area of SE London 5km wide (from roughly Peckham to Crystal Palace) and instead made EVERY SINGLE ONE of those 20,000 flights approach at low altitude over Forest Hill over an area less than 250m wide. If you want a visual representation of that effect imagine if ALL the blue dots below (which show the previous area of dispersal) were put in the red rectangle (the current situation) and then imagine living in proximity to that rectangle - which is over Forest Hill:

That’s a great graph! My house is bang in the middle of the FH bit. It really shows why some people find it a huge nuisance and others can’t see the problem.

@ThorNogson - good news that LCY being forced to look at airspace. I know it’s just a first step and long road ahead but feels like some progress.

This is definite progress. Thanks ThorNogson. Complaining is simple and quick https://www.londoncityairport.com/corporate/Environment/Environmental-Complaints-Enquiries

Hi everyone. Is it me or since last night there has been constant aircraft noise? I had to wear earplugs when I went to bed at about 11pm last night and it woke me up at 5.15 am this morning. Even now there does not seem to be any pause between flights anymore - it is just constant noise. Please let me know if you are experiencing the same. I’m in the Honor Oak Park area, just by the station at the other end of Devonshire Road. Thanks, Vanessa

Yes they are all Heathrow planes, going over at about 4500ft. several after 11pm last night, and starting over you at just after 5am, then very regular after 6am. It’s not an unusual pattern, but it does seem to be giving quite a sustained roar over the area at the moment - maybe its something to do with the high winds dispersing the sound more than usual? It doesn’t help with the noise but you can check what Heathrow planes went by at any time of any day on their Webtrak plane mapping tool, at https://webtrak.emsbk.com/lhr4.

I’ve noticed this over the last few months. Also mid afternoon. There seems to be lower air raft. I noticed the noise and assumed there must be new flight paths.