Oops! I complained to London City Airport but they were Heathrow flights!

Is there an area in London that is not on a flight path? I’m seriously considering moving but I would not want to find the same problem elsewhere! How do I check?

I did that the first time. Generally, most of the late night/early mornings are Heathrow. Daytime ones tend to be City. Next time I complained to City, I thanked them for their earlier response but pointed out that with both airport flight paths overhead on the same day, it’s not surprising that sometimes it’s hard to tell.

Is there an area in London that is not on a flight path?

with the Heathrow current flight paths, maybe. If expansion goes ahead, not really. 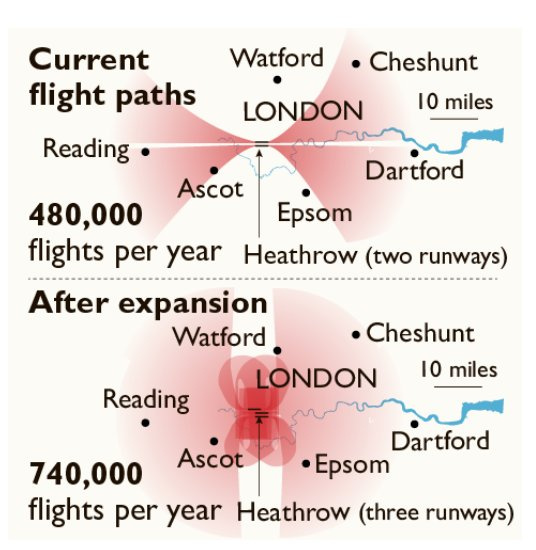 This evening seems especially noisy. Flightradar24.com is showing incoming LCY flights at 1,475 ft over Forest Hill (e.g. the delayed 17.50 from Dublin scheduled to land at 19.30 but an hour and a half late, and the 19.55 from Milan scheduled to arrive at 20.50)

Are they flying lower because we also have LHR traffic in the area?

Update 22 Mar 2019 - I have asked LCY to conform the height of overflying aircraft last night.

And this morning’s incoming Heathrow flights are early - before 04.30 - and according to Flightradar24 are lower than usual at below 3,000!

Are they flying lower

Yes also noticed noise last night. FlightRadar altitude data is usually dismissed as indicative only and unreliable by airports. Can’t see anything on London City’s own tracker Travislcy which shows anything other than 2000 ft over us yesterday evening. But they have been wrong before - there was a period last year when their own online tracking system was out by 200 feet due to a software error.

according to Flightradar24 are lower than usual at below 3,000

Does Heathrow’s own altitude tracking confirm this - if so I’d say that’s worth following up.

Does Heathrow’s own altitude tracking confirm this

Too complex for me, but I’ve written to them.

Now available on the CAA Airspace Change website are details of the London City Redesign of Departures and Arrivals Routes.
Here is the site https://airspacechange.caa.co.uk/PublicProposalArea?pID=131 . You can sign up for news updates as the multi stage process is followed.

As you would expect from London City, there is no mention in their initial statement of prioritising noise relief for the overflown, and in a recent meeting with Forest Hill Society and Len Duvall, our GLA Member, City’s executives showed little interest in engaging in any meaningful way with our complaints or suggestions, despite a five fold annual increase in complaints and their claims to be good neighbours to local communities.

Under the relevant CAA Regulations (CAP1616) which govern this kind of change, City will eventually have to engage with community groups, it is a question of how. My sense is that they want to do as little as possible.

What to do? Now is a critical time, if they don’t prioritise what we want in their objectives, we may, at the end of this process, see no change at all. Letters to their CEO, Robert Sinclair, to our MP’s Ellie Reeves and Vicky Foxcroft, to the Minister responsible Baroness Sugg, could ask that the concentrated flight path over SE London is reconsidered and replaced by dispersed flight routes, that City fly higher for longer over SE London and that the redesign by two London Airports reduces or eliminates double overflight with Heathrow. And that these objectives are clearly documented in the London City Airport plans submitted to the CAA for the Airspace Change process.

"### Purpose of this change

As part of the wider airspace modernistation in the South East, London City Airport Ltd. is planning to make changes to integrate the airport’s arrival and departure routes, and associated airspace structures, with proposed higher level routes proposed by NATS. These changes could affect traffic at altitudes from 0 to 7000ft. London City Airport currently has a system of PBN and conventional SIDs, STARs and arrival transitions which were introduced in 2016. Passenger delays are expected to increase sharply over the next ten years if the airspace structure and route network are not upgraded to introduce additional capacity. The Future Airspace Strategy Implementation South (FASI South) programme has been established by NATS and 15 key airports operating in southern England, including London City Airport, to coordinate a series of linked ACPs that will modernise the overall airspace structure and route network."

April 9th to 18th, 10 consecutive days of every single London City aircraft flying just 2000 feet over Forest Hill. In Nov 2018, Liam McKay, a director of this airport said . 'The key metric for us is noise complaints as a reflection of distress levels’.
So complain if you are bothered by this at all otherwise they think this is ok.
Here is where you do it. https://www.londoncityairport.com/corporate/Environment/Environmental-Complaints-Enquiries

Me three… it’s been more obvious today with the windows opening the lovely weather.

So complain if you are bothered by this

Do you think it’s better to complain to the airport - who seem totally uninterested - or elsewhere? e.g local MP?

The industry has been designed to enable it to ignore the problems it produces. City Airport is interested in growth, profit etc, and the CAA " … has few powers to control noise and considers that its main statutory duty is to facilitate aviation growth".
https://www.aef.org.uk/aef-noise-guide/

It is an unavoidable conclusion that we ordinary citizens have no legal right of quiet enjoyment of life/property, and that there is no agency, or department of local or central government that has any interest or responsibility for these issues.

Noise pollution enforcement is non-existent, and there are no standards anyway. The police make it clear with their actions that the ‘right to fly’ has a very high priority for police resources, and that seems to have Government support.

"London’s Metropolitan Police said it had “strong plans in place that would enable it to deploy a significant number of officers to Heathrow and take firm action” if needed.
Interior minister Sajid Javid said he wanted police to “take a firm stance and use the full force of the law”.

Done. Thanks again for continuing to flag this and for simplifying the process of complaining

LCY concentrated flight path over Forest Hill again today, that’s about 3 weeks solid now without respite (as the wind has been Easterly). Just a polite reminder that complaining once isn’t enough - part of LCY’s strategy in imposing the flightpath on a small number of people is the hope/expectation that they’ll only complain once despite being affected by the noise on approximately 200 days per year (and disproportionately during good weather). So we need to complain every day they over fly us. If you save the complaint page as a favourite and use Chrome you can set up the form to autocomplete your details so it only takes about 10 seconds to file a complaint.
https://www.londoncityairport.com/corporate/Environment/Environmental-Complaints-Enquiries

Do you think it’s better to complain to the airport - who seem totally uninterested - or elsewhere? e.g local MP?

The reason to make multiple complaints to City is that it keeps one particular type of pressure on them because they have to publish their complaint numbers and explain them to the DfT and their controlling local authority, Newham. If the numbers drop, it lets them off that hook and simply allows them to say , as they did to the GLA last November, that they ‘only’ get on average a complaint a day.

This in itself will not make change happen- City do not propose changing anything until the airspace modernisation programme is complete, about 2024. That may or may not mean they then begin to fly higher than 2000ft, disperse more widely or provide alternative routing over SE London.

The threats to our environment are first, that City already has permission to increase aircraft movement numbers from the current level, thanks to Newham Council and Mayor of London waving it through (even though he opposes Heathrow expansion).
Second, that they are preparing a new long term 'Masterplan ’ this year, and we can safely assume they will not be proposing to downsize.

The GLA (probably not the Mayor though) will likely oppose further expansion of London City Airport. I’d expect our MP’s to take a view and oppose if enough voters show a concern. I suspect though that their mailbags are not bulging on the issue of aircraft noise? Meanwhile LB Newham will approve anything as long as it gives jobs to their residents.

Understood, I will continue to complain.

Mayor of London waving it through

Interesting - do you know any more about how this came about?

Sadiq Khan’s position makes little sense to me. In 2016 he approved the London City increase to 111,000 movements, reversing a block on expansion by the previous Mayor. Press coverage of that is easy to find. Like this. https://www.edie.net/news/6/Sadiq-Khan-s-pollution-pledges-called-into-question-with-City-Airport-expansion-approval/

In 2017 he appeared to join the fight against concentrated flight paths, yet that was what he had effectively ok’d in 2016 as they were the only flightpaths City were using. Airportwatch said:- ‘Campaigners have won the backing of London Mayor, Sadiq Khan, in their bid to get rid of the concentrated flight paths. In written answer to a question from Green London Assembly member Caroline Russell, he said; “It is clear that the concentrated flight paths introduced by London City Airport are not working. We will continue to raise the issue with London City Airport. We also continue to make the case to the CAA that there must be a fairer distribution of flight paths that will address the severe noise impacts.”’
http://www.airportwatch.org.uk/2018/07/london-city-airport-may-seek-permission-for-more-flights-up-from-its-current-cap-of-111000-per-year/

But he opposes Heathrow expansion and backs the judicial reviews against the 3rd runway.

there’s a Change petition running aimed at the Mayor of London, and drawing attention to the City Airport concentrated flight path. Can’t do any harm. 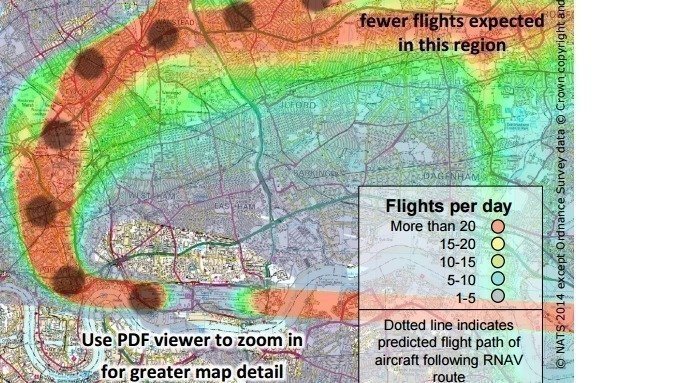